Schedule a Free In Home Estimate Today. We're always on Time and promise to submit an honest estimate on your project.

Signs You Have Water Damage In Your Commercial Roof

Signs You Have Water Damage In Your Commercial Roof

When a new year begins, most people are energetic and rearing to go. Hopefully, business owners are seeing this attitude in themselves and their employees as well. Unfortunately, it’s challenging to motivate yourself and your team to work hard when your commercial property has water damage in the roof. Before too much time passes, turn this state of events around and contact Delta Home Construction contractors. They can assist you in spotting water damage in a commercial roof.

Most commercial buildings are much bigger than most residential properties, which means that there’s more roofing to maintain and look after. And when the time comes to repair the water damage or replace an old roof, it can get costly. Leaks are one of the most common problems you’ll have with a roof, and the price doesn’t get much better. When your roof starts leaking, water can damage your roof as it trickles down, and it can often take a long time before it presents itself as a stain on the ceiling.

When you begin the new year, make sure to inspect your attics and interior ceilings for damage and watermarks. You might have to perform a few repairs before mould and mildew starts accumulating in the dampness. But don’t ignore the problem! It takes a while for a stain to appear, which means that the damage is almost always worse than it looks. Besides, mould and mildew can cause health problems for your staff, and your ceilings can even become weakened and collapse – so call an Auckland roofing company if you see any discolouration on your interior ceilings.

Although shingles are less commonly used for roofing warehouses and factories, office spaces can still suffer from the brunt of roofs in disrepair. When shingles crack, break and fall through, your roof is left with a gap for anything to get inside. That includes rainwater and outdoor debris like leaves, dirt and even branches. You could even find that some wildlife has started using your commercial roof as shelter, such as stray cats, and nesting birds or rodents. It’s not nice to think about, but it happens. When you have missing shingles or gaps in the seams, it’s only a matter of time until you have a whole host of problems that follow. Water damage is one of the worst; when you have missing shingles, the gaps allow much more rainwater inside the interior of your roof, which will increase the amount of water damage you’ll need to repair.

After you opened up for business as usual after the Christmas season, were you greeted by the damp and pungent smell of mould or mildew? Sometimes, when you’re in a building that has slowly started accumulating mildew, you might not notice it until it gets very bad. Unfortunately, everyone else can smell it too. Not only is it bad for business and makes for an unpleasant working environment, but it also poses a health risk for people exposed to the airborne spores. Get an Auckland roofing expert to inspect for mould and mildew as well when you suspect that your roof is leaking. 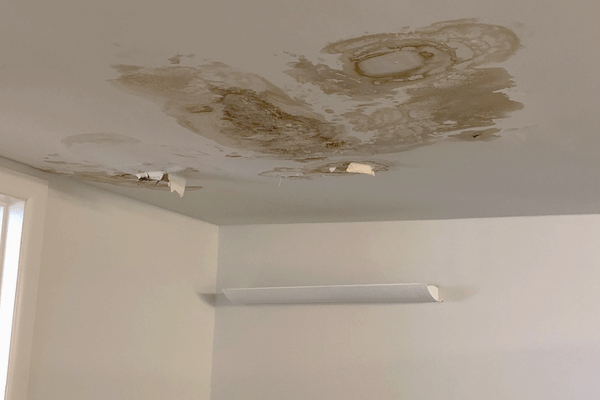 Also known as water pooling, ponding water is what you have when you have improper drainage on your roof. This problem is most commonly found on flat roofs or commercial roofs, and it can damage your roof quite severely. Ponding water represents as puddles that haven’t drained away down the gutters and downpipes, which means it just sits there until it dries. However, this water can cause what’s known as concrete cancer – a degradation of concrete – rust, mould and mildew growth, and leaks. If you have this problem, you’ll need to waterproof your roof to avoid damage.

Unfortunately, even when you install commercial roofs built with materials of the highest quality or expense, it’ll still age. Nothing lasts forever, and that includes an investment in your building like a roof. However, you can get the most out of your roof if you maintain it frequently, inspect for water damage and perform repairs as soon as damage is found. When your roof is coming to the end of its lifespan, be on the lookout for water damage – it gets more prevalent the older your roof becomes.

Your commercial property is what you depend on to have a successful and prosperous business, and your roof plays a large part in the investment. Make sure to follow this guide on how to spot water damage in a commercial roof, and have Auckland roofing companies on speed dial for whenever you need them.

What Types Of Roofs Are Best For Your New Jersey Home?

No comments to show.